Just east of Seattle sits Bellevue, the fifth-largest city in Seattle’s metropolitan area, and with waterfront access, leafy neighborhoods and cosmopolitan restaurants and boutiques, it attracts buyers looking for the total small-town package.

Just 10 miles from Seattle’s city center, it’s an easy commute across the Evergreen Point Floating Bridge (the world’s longest floating bridge) and Interstate 90, yet it feels a world away from the city.

“Bellevue is Seattle’s beautiful little sister on the Eastside. Once a sleepy suburb, Bellevue has come into its own with a vibrant business community and world-class shopping and restaurants,” said Anna Riley of Windermere Real Estate, a member of Luxury Portfolio International. “The rate of appreciation for homes on the east side of Lake Washington has outpaced Seattle over the past few years. Locals attribute that to less traffic than the city, larger lot sizes, waterfront parks, the school district and a forward-thinking, collaborative local government.”

Bellevue is bordered by Lake Washington and the Clyde Hill enclave to the west; Lake Sammamish to the east; State Route 520 Freeway to the north; and Newcastle Way, SE 64th Street and Cougar Mountain Regional Wildland Park to the south.

“The city of Bellevue is a rather diverse collection of neighborhoods. The most popular market area is that which immediately surrounds the urban job center of downtown Bellevue (west of I-405). This includes the city center, West Bellevue, Ashwood, Beaux Arts Village and Enatai, said Dean Jones of Realogics Sotheby’s International Realty.

"Looking at Bellevue City proper, we find an average condo price of $581,000 with a high sale of $3 million for the year,” said Shawn Filer of Northwest Group Real Estate. The highest asking price for a condo this year was the penthouse at Bellevue Towers, which was listed at $13.95 million, but has been taken off the market until the new year.

“For single-family homes, the average sales price is around $1.32 million with a high sale on the waterfront at $21 million.

Most new construction in the area falls in the $2.2 million-and-up category for no view, and $3.5 million and up for homes with water views,” Mr. Filer said.

Mr. Jones further confirmed this range. “As a snapshot of this premier community, there are currently only 10 listings available priced below $1 million, all of which are condominiums. Generally speaking, the price points below $2 million typically mean an older mid-century home on a redevelopment lot.  Selection remains slim for single-family homes, and range from a mid-century rambler on a redevelopment lot for $1.25 million to a gated 16,000-square-foot estate on 1.1 acres in the Bridle Trails neighborhood, an area with a rural feel, for $15 million. In fact, year-to-date there were 113 sales priced between $1 million and $2 million and, remarkably, 82 sales that closed above $2 million,” he said.

As for condos, Mr. Jones said, “Actively, there are only 20 resale condominiums listed for sale—ranging from $299,500 for a modest 308-square-foot studio to a luxury penthouse of 3,561 square feet for $5 million."

“Bellevue is a true city with luxe apartments, high-rise condos and a mix of single-family residential styles,” Ms. Riley said.

There are options for people who want more urban-style living. … and those who don’t.

“If a more suburban life is your vibe, try one of the neighborhoods that welcome horses with acre-plus lots and access to city horse trails,” Ms. Riley said. “New construction tends to be modern and sleek in style, but it mixes well with the older northwest contemporary and traditional styles.” 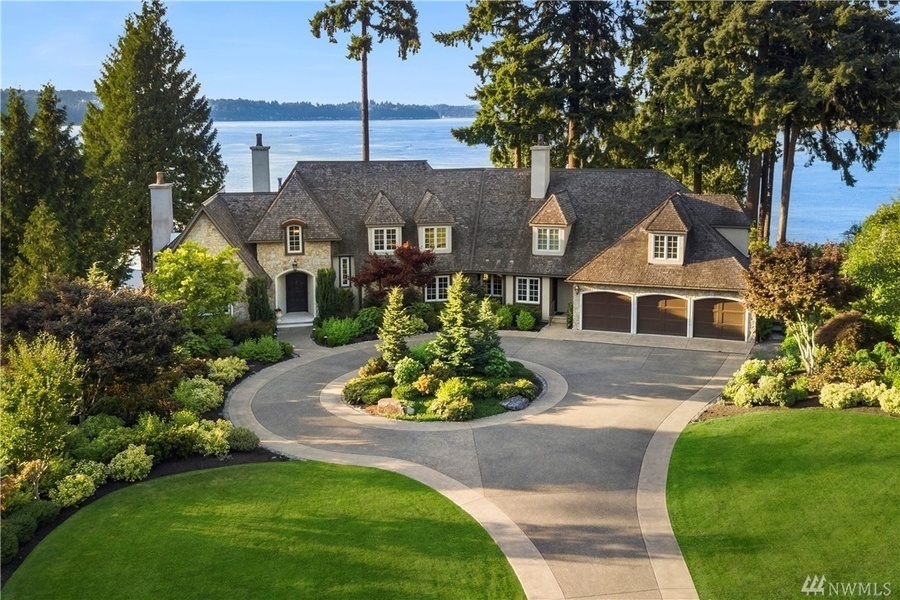 This waterfront four-bedroom home sitting on an one-acre lot is currently listed for sale at $4.5 million.Coldwell Banker

What makes it unique

Situated between two lakes with swimming beaches, bordered by natural areas with miles of trails and dotted with parks, Bellevue is a haven for outdoor enthusiasts.

It also retains an urban edge thanks to a thriving downtown area with restaurants, boutiques and corporate offices for companies including Eddie Bauer, Microsoft, T-Mobile, Verizon, Drugstore.com and Expedia and Paccar.

“Bellevue is no longer in the shadow of its sister city, Seattle. What was once a single stoplight town, today is a metropolis home to approximately 150,000 people, and the downtown area is the second largest city center in the Seattle area with more than 1,300 businesses, 45,000 daytime employees and in excess of 10,000 full time residents,” Mr. Jones said.

“Being the town center for adjacent neighborhoods such as Medina (home to Bill Gates and Jeff Bezos), it’s little surprise that Bellevue offers myriad luxury boutiques, glitzy restaurants, decadent spas and other lifestyle offerings that would be expected in any world-class city,” he said. “Bellevue Square Mall is considered one of the top five most successful malls in the U.S., and the city’s other mall, the Bravern, is home to luxury retailers such as Neiman Marcus, Gucci, Hermes and Louis Vuitton.” 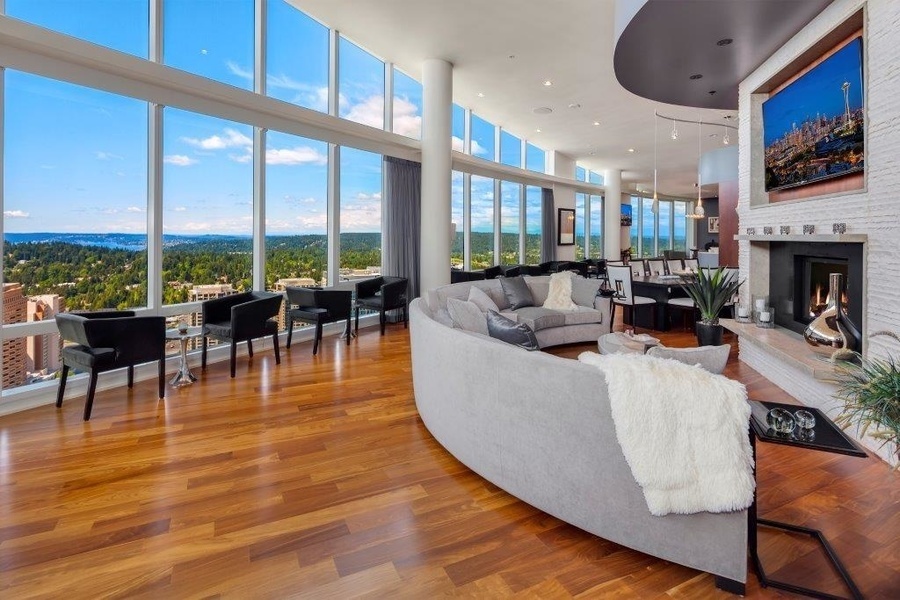 The pictured three-bedroom penthouse atop of Bellevue Towers in downtown Bellevue is currently asking for $13.95 million.NWG REAL ESTATE

The area’s strong school district, with nationally-ranked schools is a primary draw for families. The public schools are top-tier and private school options include Eastside Christian School (pre-k through grade eight), the Overlake School (grades five through eight) and the Eastside Academy High School among others.

MORE: A Seattle Suburb With Sprawling Mansions and Incredible Views

High-net-worth tech moguls favor Bellevue, but they prefer to keep a low profile, as is the case with Microsoft CEO Satya Nadella.

Other notable residents who have called Bellevue home in the past include Sisters Ann and Nancy Wilson of the band Heart, and actors Timothy Omundson and Peter Horton.

MORE: Click for More Profiles of High-End Neighborhoods Around the World

“The Bellevue market is doing very well … $1.3 million is the new $850,000, and dirt values have pushed up pricing on what was once starter-home pricing,” Mr. Filer said. “New construction values have climbed from $1.8 million to $2.8 million in just two years.”

“Bellevue—especially its preferred neighborhoods west of I-405—remains one of the most sought-after and valuable submarkets in the Seattle metro area,” Mr. Jones said. “The residential outlook is strong with demand and median home prices are continuing to expand. Increasingly, large employers, including Seattle’s Amazon have decided to open satellite offices in Bellevue to cater to the residential preference for some to live there. Plus, a recent rezoning of downtown Bellevue could soon find glimmering residential and office towers topping 600-feet,”  he said. Also, a regional transportation system known as Sound Transit 3 will link Bellevue via light rail to neighboring job centers like Redmond, home to Microsoft and, of course, Seattle, home to Amazon, Google, Facebook and other tech titans.“ (But don’t hold your breath for that, according to the Seattle Times, the transportation project won’t be complete until 2041.)

Right now is optimal time to start looking in this market, according to Ms. Riley. "The winter months are the best time to be a buyer because once the calendar rolls over to the new year, buyers better be prepared to compete, especially since Bellevue is now the No. 1 choice for international buyers in the Seattle area,” she said.